“Happy is the man, I thought, who, before dying, has the good fortune to sail the Aegean Sea.” 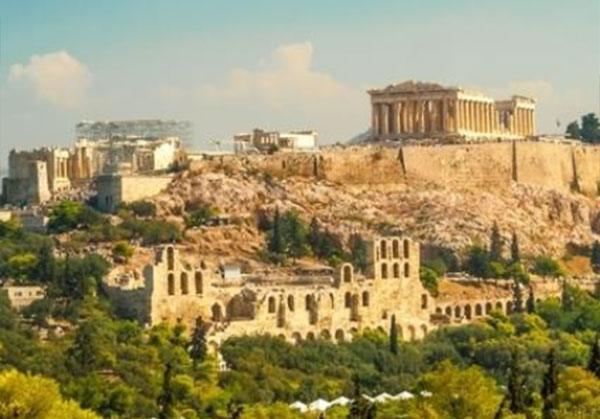 Athens (The Birthplace of Democracy)

The southernmost capital on the European mainland is also one of the world’s oldest cities, with its recorded history spanning over 3 400 years and its earliest human presence starting somewhere between the 11th and 7th millennium BCE. Now it’s both capital and largest city of Greece.
Long ago scholars argued whether the ancient city was named after Athena, the goddess of wisdom and warfare, or it was the other way round. Now all generally agree that the goddess takes her name from the city.
Home of Plato’s Academy and Aristotle’s Lyceum, Athens is widely referred to as the cradle of Western civilization and the birthplace of democracy. The term
“democracy” comes from the words for “common people” and “strength”. Led by Cleisthenes Athenians established what is generally held as the first democracy in 508–507 BC. The heritage of the classical era is still evident, widely represented by ancient monuments and works of art, the most famous of all being the Parthenon –a former temple of the goddess Athena, patron of the city. Athens was the host city of the first modern-day Olympic Games in 1896…

(Continues at the bottom of the page.) 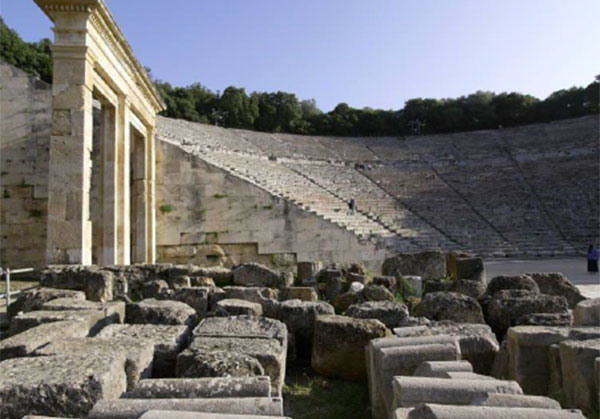 The new municipality of Epidaurus was formed by the merger of two minor municipalities in 2011. It is named after the Ancient Greek polis of Epidaurus and is famed for its 4th-century-BCE temple of Asclepius, the god of healing. Beside temples to Asclepius, excavations of the sacred precinct revealed also a theatre (now active), stadium, gymnasiums, baths, a hospital and a sacred area where patients slept.
The medicine temple at Epidaurus was the most celebrated healing center of the Classical world. It was a place where people would come to receive either treatment or some sort of healing, whether it was spiritual or physical. Even after the introduction of Christianity and the silencing of the oracles, the sanctuary at Epidaurus was still known as late as the mid-5th century but as a Christian healing center.

The island of Poseidon, god of the Seas and other waters, is a small (12 sq mi) island-pair. A bridge connects the two islands over a narrow strait ever since antiquity when they were divided.
Traces of Poseidon’s sanctuary are to be found in the middle of the island. Opposite the marina (10 min by boat) lie the green shores of Peloponnese island with the famous lemon forest. They say it’d be a huge mistake to miss it.
In 1830, during the War of Independence against the Turks, Poros became Greece’s first naval base. 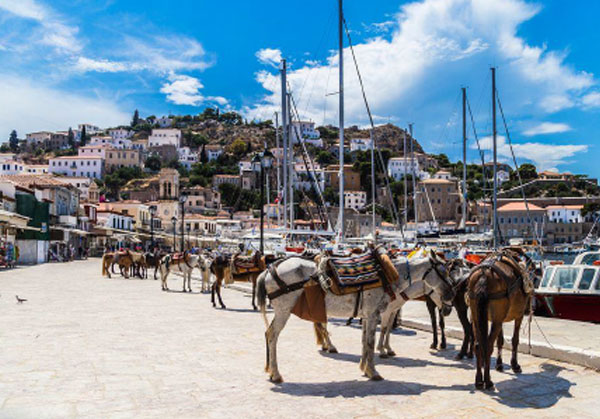 No, the island was not named after the monster – the many-headed serpent we know from the Greek mythology and the movies. “Hydra” here derives from the word for water. Which now sounds like an irony. For well-watered and quite wooded with pine trees in the past, today the island (19.2 sq mi) is denuded and dry. All water is either shipped from the mainland, or collected from rain.
There is only one main town, known simply as Hydra port – a crescent shaped marina with shops, restaurants and artistic residents.
Industries here include: sponge fishing, cotton weaving, shipbuilding, and international tourism.
Donkeys are the only “monsters” one can see on the narrow cobblestoned streets. For hundreds of them serve as public transportation since the cars are all banned. 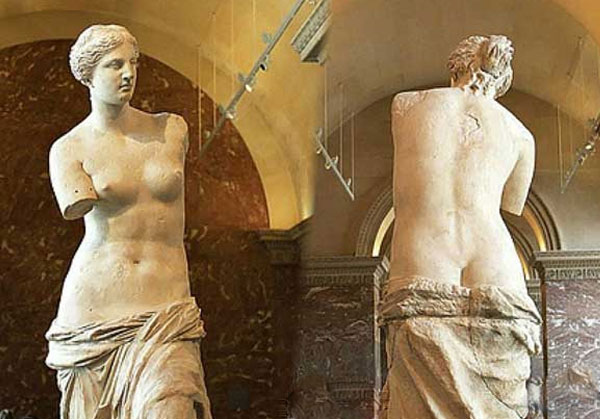 The volcanic origin of this 58-sq-mi island explains the wonderful shapes and colors of the rocks. Milos has 70 beaches, the longest being just 0.62 mi.
But what makes the island world famous is Venus de Milo — the statue of Aphrodite, the ancient Greek goddess of love. The misnaming (Venus is the Roman goddess of love) is a French soldier’s fault. He, in the company of a local farmer, excavated the figure in 1820 and send it to France.
Though it was reconstructed to a standing posture (6 ft 8 in), the statue’s arms were never found, but scientific speculations on what she was holding in her now missing hands – a spear or an apple – are still going on.
Some even think the marble beauty may be Amphitrite, the goddess of the Sea and wife of Poseidon. But we shall talk more about the divine couple when we land on Naxos. 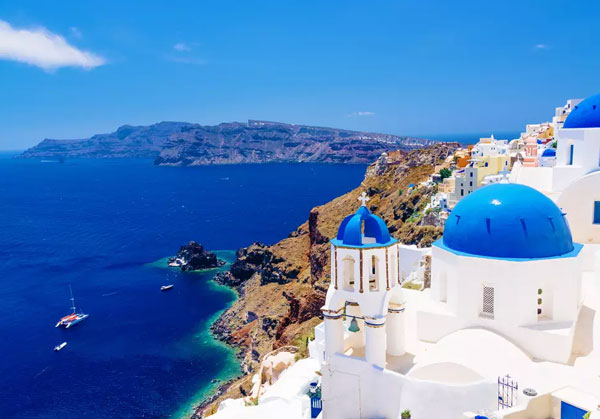 One of the largest volcanic eruptions in the history of Earth occurred on this island, most probably it was long before 1500 BCE. Believe it or not – scientists do — ash and pumice from the eruption have been found as far away as Egypt and Israel.
The island with many names, known to be occupied even before 2000 BCE, was called Calliste, “Most Beautiful” in antiquity and now: Santorini, Thera, Thira. Its bow-shaped rim forms an open lagoon that measures 37 miles in circumference. The lagoon is rimmed by red, white and black volcanic cliffs rising up to almost 1 000 feet.
Red-wine grapes are grown here, but no wander pumice is the main export of the island. This very light and porous volcanic rock, that serves as skin exfoliant in pedicure procedures, is industrially used for water filtration and as growing substrate in horticulture. 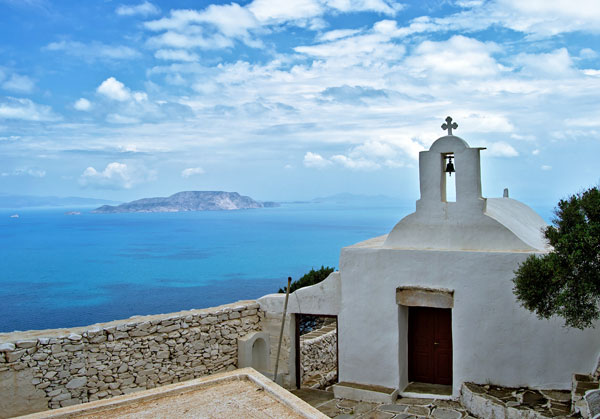 You may fall in love with the most beautiful piece of land (42.094 sq mi) in the Cyclades island group just looking at it, even before the anchor is dropped. Everything is on a dollhouse scale here – the pretty little chapel at the entrance of the harbor, the small shops, the tiny bars and taverns. Right above the marina is the white town of Chora, full of stairs and narrow alleys that make it inaccessible for cars of any kind.
This is the island where Homer is said to be buried. Homer is the name traditionally ascribed to the blind Ancient Greek bard who authored the Western civilization’s first complete stories — “Iliad” and “Odyssey”, which also made perfect Hollywood scripts.
The name of the island has derived from the word for violets as they were commonly found here. But nowadays Ios is more famous for its goat and sheep milk cheeses. 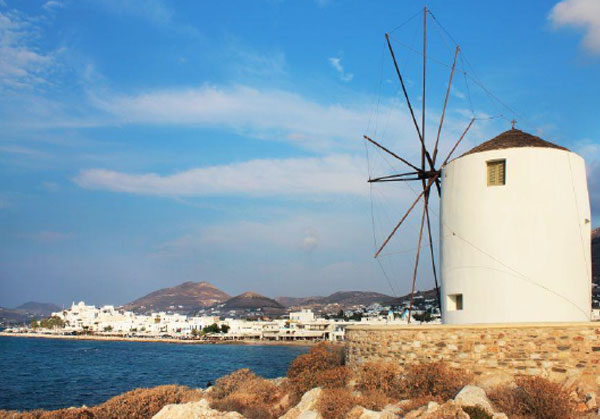 Looking at the gentle outlines of the island’s mountains one can hardly imagine they are the source of the best white marble in the world. Most of the masterpieces of the Ancient Greek Sculpture, including Venus de Milo, were curved from it.
The most glorious period in the history of the place is the 8th century BCE, when thanks to its marble the island acquired great wealth and became a major maritime power in the Aegean, establishing its own colonies. One of these colonies was the famous island of Thasos.
The whole Paros is “a sight” but Parikia, the main town, is the must see here: picturesque alleys and archways, white houses and multitude of Cycladic churches. 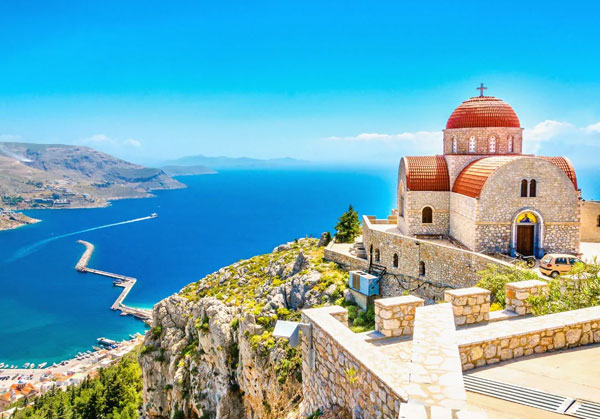 An area of 165 sq mi is what it takes to lead the championship amongst the Cyclades. But Naxos is not only the largest one in its island group. It’s also the highest, towering above the rest with its pyramidal peak Zas (Zeus). With its 1 001 m this is the only mountain in the whole isle complex to reach an altitude of more than 1 km (0.62 mi). In ancient times, Naxos was famous for its wines and was a centre of the worship of the god of the wine – Dionysus, who was believed to live on the island. According to Ancient Greek mythology he found Ariadne, his wife-to-be, asleep on the shore. She was left there to die by her ungrateful lover, but that’s a different story. Luckily, she was rescued by and married the god.
The locally produced citron liqueur, however, is not a myth, it’s a legend. “Kitron” is hard to find outside the Greek island. It is made from the fruit and leaves of the citron tree, which is similar to the lemon tree but stronger and slightly different in taste. The fertile and well-watered valleys of Naxos produce outstanding white wine, citron and citrus, but still the chief export is emery, a dark granular rock used to make abrasive powder. 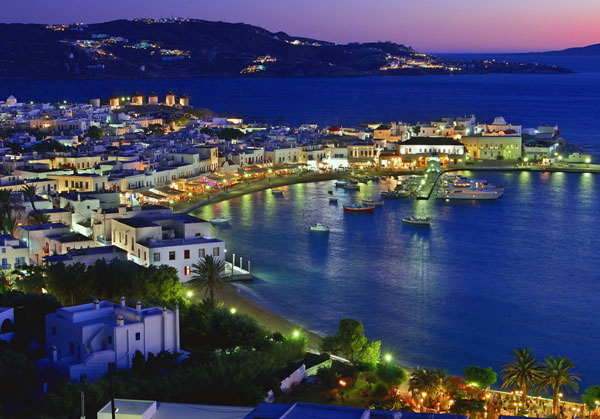 A piece of rock thrown by Heracles against the Giants. That’s the island of Mykonos, according to the legend. And how big can be a rock, thrown by someone, even if that someone is the greatest Ancient Greek hero and a paragon of masculinity? Well, just 33 sq mi, which makes the isle one of the smaller in the eastern Cyclades. Mykonos has poor soil and is ill-supplied with water; it thus has little agriculture, the major crops being barley, grapes, and figs. Manganese is mined here and yet tourism is the chief economic activity.
Located on the west side of the island is its capital, Mykonos town, also known as Chora, “the Town” in Greek, following the local practice when the name of the island itself is the same as the name of the principal town. It is a well-known centre of vibrant nightlife and has many establishments catering for the LGBT community. The sun shines for up to 300 days per year.

A large harbor with two hills towering above it. Most of the public buildings, churches, schools, stadiums and many mansions were built in the elegant neoclassical style, with heavy doors, plaster decorations, cornices at the windows and fine ironwork on the balconies. For many decades during the 19th century the town of Ermoupoli, capital of the island and of the Cyclades island group, was Greece’s main commercial harbor but not anymore. Today the whole island (32 sq mi) is mostly famous for its tourist attractions: beaches, sports facilities, taverns & nightlife.
Syros also has a British cemetery where various people are buried, including many seamen and servicemen who died in the Cyclades region, particularly during the Second World War. The consulates of France, Britain, Italy, the Netherlands and Scandinavian countries bear witness to the connection of Syros with the wider European scene. 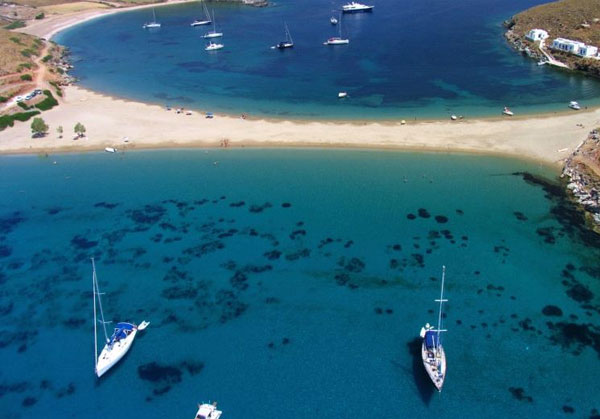 The old windmills, the tiny fishing boats, the crystal-clear sea water and the cool breeze… Kythnos is only 4 hours away from Piraeus, port of the cosmopolitan Athens, but it is a completely different world.
it is not uncommon to hear music coming from the cafés – cheerful music, played on a violin and a lute. The fast dance, performed in those cafés is known as “balos”. 99 sq mi of hilly and generally bare land. It is a peaceful and quiet island as it lies outside the mainstream of tourism.
It was united to Greece in 1832, together with the rest of the Cyclades. 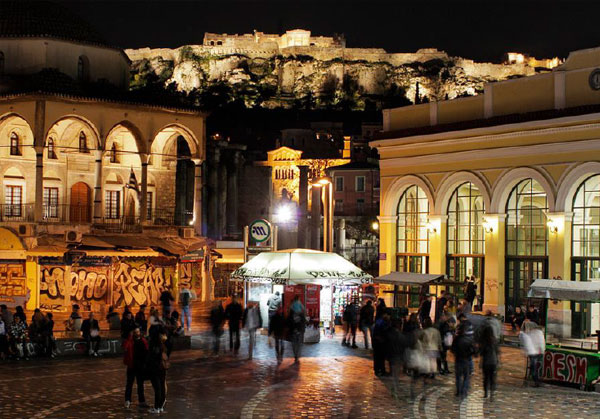 (Continues from the top of the page.)

…Hosting the Olympics once more, in the summer of 2004, led to many positive changes: all signs in perfect English, a modern subway, green parks, new freeways and a highly accessible airport.
So, nowadays Athens is not just a global city, but one of the biggest economic centres in southeastern Europe. Its port Piraeus is the largest passenger port in Europe and the second largest in the world (after PortMiami, USA). The port of Piraeus is also expected to become the busiest port of the Mediterranean in terms of container traffic by 2019.
Athens is meriting more than a stopover en route to the islands, but if you are wearing a pair of comfortable walking shoes, you can still make the most of a day or two.