You are here: Home / Greece / Cuisine

Having the utmost respect for science, we should admit that a country could be seen best through its cuisine rather than through its history, economy, geography, religion, etc. For cooking & dining could happen on a spiritual level. It’s just a matter of opening your mind and palate to new flavours. Preparing meal for someone – whether it’s as plain as a Greek salad or as time-consuming as baklava or moussaka – is actually  “saying everything by saying nothing”.
Greek cuisine is a Mediterranean one. It makes wide use of all kinds of seafood, wine, vegetables, olive oil, grains, cheese, lemon juice, herbs & pasta. But no other meat is excluded. The most popular Greek fast food — souvlaki – is made of poultry, lamb, beef, pork. It consists of small pieces of meat and sometimes vegetables grilled on a skewer. It’s eaten hot, usually with a pita bread, fried potatoes and sauces.
Remember that any good recipe was based on a dare. So, don’t be hard on yourself and take a “cooking class” now!
What follows is a poor, yet vivid, attempt to give you the idea of the Greek contribution to the world cuisine. 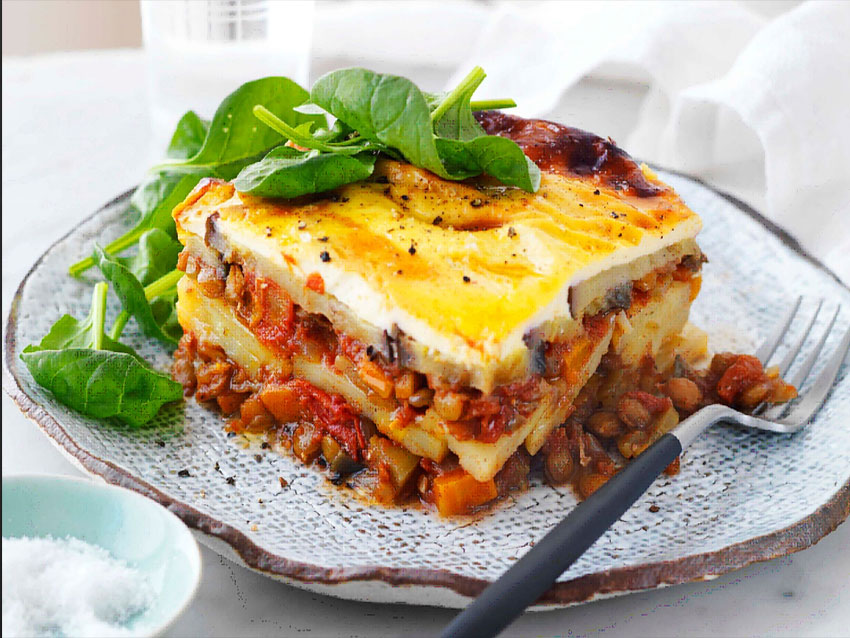 What looks like a piece of cake when served but is actually a main course dish is called moussaka. Some say that if you think the way to a man’s heart is through his stomach, you’re aiming too high. Apparently those have never given moussaka a chance.
The origin of the recipe is pretty arguable as is any acclaimed recipe on the Balkans, that often turns out to be… Arabic. What can’t be denied though is that the Greeks are the first ones to publish it officially (1920s).
There’s no consensus on the ingredients and the cooking techniques either, but if you want to do it like its “modern father” – the French-trained Greek chef Nikolaos Tselementes – look no further.
A classic recipe has three layers that are separately cooked before being combined for the final baking: a bottom layer of sliced eggplant sautéed in olive oil; a middle layer of ground lamb lightly cooked with chopped or puréed tomatoes, onion, garlic, and spices (cinnamon, allspice and black pepper); and a top layer of Béchamel sauce or custard. The composed dish is then layered into a pan and baked until the top is browned.
In Bulgaria, Romania and Albania – the neighbouring countries – boiled and chopped potatoes are mixed with lightly cooked pork or beef mince – 1:1. Eggplants and tomatoes are optional, but the top layer of yogurt, mixed with raw eggs and a table spoon of flour is a must.
This good-looking dish is really erotic for the spaces – especially cumin — are so sensuous.

The word “frappé” is French and means “chilled in crushed ice”. But, please, do not be misled by its name. Frappé coffee is a genuine Greek invention, made in 1957 at the Thessaloniki International Fair.
The urban legend has it that Mr. Dimitris Vakondios, a representative of an instant coffee brand, one day failed to find hot water for the preparation his usual instant coffee. So he mixed it with cold water and ice cubes in a shaker.
Thus the frappé become a hallmark of post-war outdoor Greek coffee culture.
Nowadays this foam-covered iced coffee drink is served at virtually any café across the country and the region. Especially during the hot months of the year.
You too can do the magic if you have: a hand mixer or cocktail shaker, a tall glass and a drinking straw of natural origin. Add 30 ml of plain water to 1-2 teaspoons of instant coffee & sugar, then mix well until you can’t tell the difference between what you have received and shaving foam. Fill up the glass with ice and pour some more water, milk or vegetal (oats/soya/rice) drink. Enjoy!